Do You Remember? The Imperial Hotel 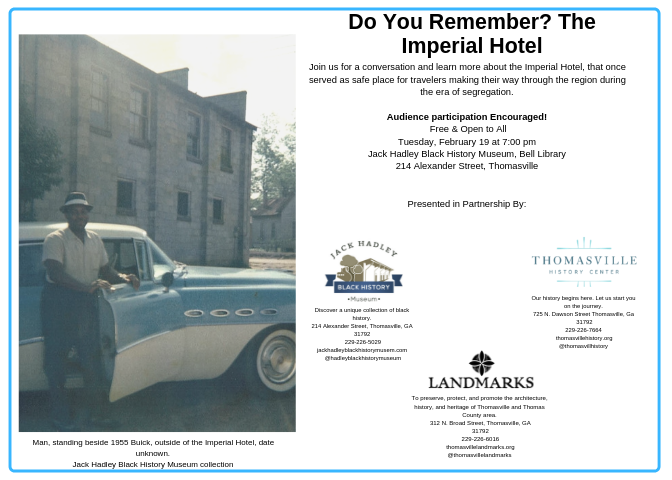 We are seeking your help with our second installment of “Do You Remember?” this time focusing on the Imperial Hotel. The Imperial Hotel was owned and operated by Harvey and Dorothy Lewis Thompson. The hotel opened in 1949 and closed in 1969. It was listed in the “Green Book” (a major motion film released November 2018), tells the “Green Book “narrative. The “Negro Traveler’s Green Book the Guide to Travel and Vacations” also known as the Green Book guided African Americans Traveling throughout the southern United States from 1936 to 1960’s. The Imperial Hotel is listed in the “Green Book” beginning in 1954, as one of the many business establishments built by and for African Americans.

This collaboration between the two local museums and Thomasville Landmarks for the purpose of capturing and saving history that may be forgotten otherwise. We are asking local citizens, to visit the event and tell your stories of what you may know about the Imperial Hotel. We invite you to come out to the Jack Hadley Black History Museum, Perra Bell library located at 214 Alexander St, Thomasville on Feb. 19th from 7:00pm to 8:00pm to share your story. 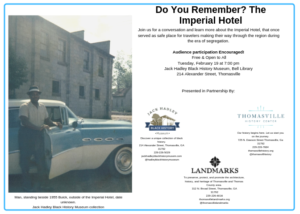