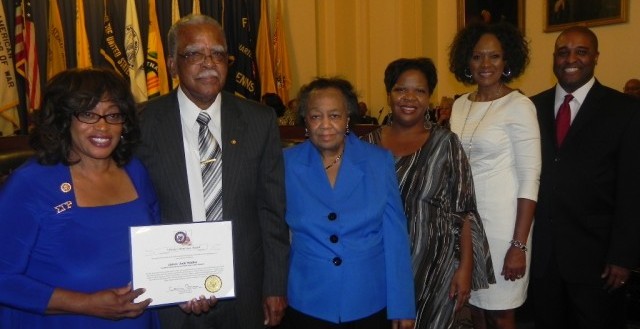 The call came from Mr. Ron Armstead, the Executive Director of the Congressional Black Caucus Veterans Brain Trust. He informed Jack that he had been selected to receive the Congressional Black Caucus Veterans Braintrust Award. It would be present to him by Hon. Corrine Brown at the Cannon House Office Building in the Nation Capitol on September 20, 2013.

Later in the weeks to follow, e-mails beginning to arrive providing him all the details of this special award and he was one of the few outstanding Veterans been nominated and selected across the nation to receive this honor by the Congressional Black Caucus Veterans Braintrust Award Committee.

James “Jack ‘Hadley received this award due to his tireless efforts to promote and achieve the mission of the museum, which briefly is to: “PRESERVE AND COLLECT historical and cultural artifacts of African-American past and present”. The recent article, on page 34, of the Thomasville Scene magazine June-July 2013,(see the following link: Thomasville_Scene ), published by the Thomasville Times Enterprise, came to the attention of Mr. Ron E. Armstead, who is the Executive Director of the Congressional Black Caucus Braintrust . This “think tank” and “advisory group” is “composed of representatives of various African-American community based groups, veteran’s organizations, associations, institutions and individuals without regard to era, gender or other affiliation.”

On September 20th at the award ceremony, Congressman Sanford Bishop and Congresswoman Corrine Brown made outstanding remarks of Jack’s accomplishments as a Veteran of 28 years in the United States Air force and since his retirement in 1984 and returning back to his home town Thomasville, Georgia.

He continually to work in his community and Southwest, Georgia to accomplish much that very few veterans accomplish after their military career.

His outstanding military leadership in the military, provided him with all the necessary tools; knowledge, training and management skills to open up a Black History Museum in Thomasville, Ga., in 2006. It is named in his honor, the Jack Hadley Black history Museum…

When he left the United States Air Force for retirement of 28 years, he had less than 200 African American artifacts he and his son Jim collected and that they started at Wiesbaden, Germany in 1979. This happen because his son Jim, a junior at a Department of Defense School, Wiesbaden High School, Jim came home saying that the teachers at the school showed no interest in Black History Week. That conversation with my son caused us to establish our first Black History Collection, by creating articles cut out from Ebony, Jet & Essence magazines. That was the beginning of this Jack Hadley Black History Collection, now located at 214 Alexander St. Thomasville, Ga., on the campus of the former Douglass High School, in the Dewey City Historic District. Today we have more the 4300 African American artifacts exhibited in the Black History Museum here in Thomasville, plus approximately 450 artifacts we have in storage that we use as a traveling exhibit to schools for students to learn more about black history that they will never get in schools.

Jack always gives his son Jim all the credit, because his interest is the reason I am here in Washington, DC. to receive that highest award in the Nation Capitol from the Congressional Black Caucus Veteran Braintrust Award Committee.

Jim was unable to travel with us to DC, because he has a serious vision medical problem. We asking all our family, friends and supporters to pray for my son, at the age of 51 years old, and about to lose his eye sight is something we all do not want to happen. So please pray that God will heal him and give him his full vision back again…

I am very honor and please to have a beautiful wife of 56 years to have supported me for all these 32 years we been collecting Black history artifact to exhibit to the public and now it has caught the attention of the nation by having me to receive an award for continues to preserve and collect African American artifacts, past and present, for our local community, state and nation.

My two daughters, Jackie Hadley Artybridge of Jacksonville, Florida and Cathy Hadley Wilson and husband Eugene Wilson of Lawton Ok., all traveled to Washington to be part of this once in a Life time of seeing their father been honored in the Nation Capitol.

At the Congressional Black Caucus Veterans Braintrust (CBCVB) is co-chaired by Reps. Corrine Brown (D-Fl), Senior Member of the House Veterans Committee and Sanford D. Bishop, Jr., (D-GA), Ranking Member of the House Appropriations Subcommittee on Military Construction and Veterans Affairs. It was established in 1988, under the chairmanship of the Honorable Charles Rangel (D-NY), a decorated Korean War Veteran, Dean of the New York Congressional Delegation, and Senior Member and former Chairman of the powerful House Ways and Means Committee. This body is composed of representatives of many African American community based groups, veterans organization, associations, institutions, and individuals without regards to era, gender or other affiliation.

The CBCVB serves as a “think tank” and “advisory group” for the Congressional Black Caucus and other on such divergent issues as education, health care, mental health aging, research, employment and training, small business, and benefits and services, etc. Members of the Baintrust also identify exemplary veterans for Congressional awards bestowing public recognition and acknowledgement of national service; in addition serves as an informational resource for federal, state, and city level advisory committees on matters relating to veterans benefits and services. Over the past two decades, the Braintrust has expanded beyond the Congressional districts of the Congressional Black Caucus in active efforts to broaden its base of support among African American veterans, their families and communities.

I am pleased to extend my congratulations on your recent nomination and acceptance for the 2013 Congressional Black Caucus Veterans Braintrust Award.

I was delighted to learn of your museum’s success in preserving and collecting historical and cultural artifacts of African American past and present.

Your leadership is to be commended. Your have proven your commitment to preserving our history through hard work, and community commitment in and throughout the Thomasville area.

I am looking forward to seeing you at the congressional Black Caucus Veterans Braintrust Award Ceremony on September 20, 2013 in Washington, DC.

In addition to Jack immediate family at the ceremony, more than 25 family members, and friends living in the DC, PA. & MD area, all came to witness Jack receiving this great honor in the Nation Capitol, where more than 300 guests, packed in the Cannon House Build Veterans Affairs conference room. He was thrill to death to see some of his old Douglass High School schoolmates and old military friends he and wife knew when they were in the military; enjoyed the greeting and fellowship with his family at the ceremony. They were all excited to see Jack been honored in Washington, DC, at the Nation Capitol, where most of his guest live today, and to them, to see one of Thomasville native son coming from their roots, Thomasville, been honored by Congressional Black Caucus Veterans Braintrust, was and experience for them too.

This 25th Annual CBCVB also honored Reps. Corrine Brown Veterans an Award at a special Reception and, a salute to American Veterans, Servicemen’s, their families and supporters, at the Mayflowers Hotel, where more than 500 people attend on Thursday Evening.

At this Prayer Breakfast, one of Thomasville native son, Mr. Patrick Lundy and the Ministers of Music provided the Praise and Worship; they are a dynamic community choir that officially debuted in November 1994 at Ebenezer AME Church in Fort Washington, Maryland. Since that time the Lord has blessed the PL&MOM to minister throughout the United States and aboard.

Jack said, topping off their visit to Washington DC., they received a special tour on the inside of the Nation Capitol and witness two bills been voted by the 113th Congress. When the voting on the bills were finished, word got to Rep. John Lewis (D-GA) that we were up in the Congress Chamber’s balcony and were from Georgia. Rep. Lewis immediate came up and greeted us and was just excited as we were to meet each other. When he was leaving, Jack said he gave Rep. Lewis a big hug, and Rep. Lewis said he “needed that”. After he left, he told Rep. Sanford Bishop we were up there and was from his old district, Thomasville. He immediate came up too, and greeted the family will joy. It was a moment we all will never forget, especially meeting Rep. John Lewis, a living legacy of the Civil Rights march, with Dr. Martin Luther King, .Jr. in 1960s.

Going to Washington for this special award presentation at the Nation Capitol was one of the most important awards I could ever receive in my “life time”. I am blessed and thank all my family, friends, and museum supporters who made this trip possible.

My wife Chris and I thank all our donors, museum members, our Museum Board of Directors for making this trip possible and providing the financial contributions, for us to travel to Washington, DC to accept this award on Capitol Hill. We thank you!!